Before Us, Among Us: Celebrating the literary works of Zora Neal Hurston

As part of our efforts to celebrate Black genius during Black History Month and every month, New Profit has asked Dr. Gayle Pemberton, a leading scholar on African America literature and history, to help us highlight Black artists who have shaped American history and culture in the deepest and most profound ways. Their words, notes, brush strokes, and images can give us all hope and inspiration for coming out of this period of trauma a better nation. In this blog feature, Dr. Gayle Pemberton introduces the Harlem Renaissance-era literary genius of Zora Neal Hurston.

Zora Neale Hurston was the most visible woman artist of the Harlem Renaissance, versatile, inventive, and energetic. She was a folklorist, a novelist, a playwright, a poet, a singer, an ethnographer and anthropologist, an extraordinary gardener, and a woman known for her guile and flamboyant personality. Hurston was born in January 1891 in Georgia but moved at the age of three with her family to Eatonville, Florida. This small all-black town became one of the many sites of Hurston’s investigations of rural African American speech, religion, rituals, social and gender relations, work, play, birth, and death.

Hurston adapted to the fortunate and challenging circumstances, making her life’s work possible. She had patrons and worked as a maid; she traveled widely throughout the South and the Caribbean, often with incredible difficulty. For years, Hurston suffered from ill health, yet she jumped at every opportunity thrown her way or that she could create to write, publish, and educate as she demonstrated her love of black folk culture. Hurston was almost always controversial, but she forged ahead with her work, no matter whose sensibilities were ruffled. In her final years, she continued to write, and she did some teaching. Still, limited income, few publishing venues, and her deteriorating health contributed to her death, in a welfare home, in January 1960. She was buried in an unmarked grave in the segregated cemetery of Fort Pierce, Florida. Thanks to work in 1973 of novelist Alice Walker and literary scholar Charlotte Hunt, Hurston’s grave was found, and a tombstone was erected.

“If you are silent about your pain, they’ll kill you and say you enjoyed it.” - Zora Neal Hurston 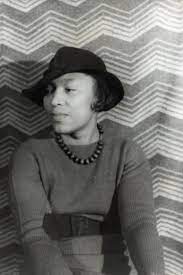 Zora Neale Hurston sought to preserve and celebrate black people’s extensive and rich oral traditions that she feared were shunned and abandoned in a rush toward urban, modern life. She had spent time studying with Franz Boas, one of the most celebrated anthropologists of the early 20th century, as she earned a B.A. degree from Barnard College. However, she had studied in many schools before landing in New York and Harlem. Her two most famous works are Their Eyes Were Watching God, a novel, and Mules and Men, a collection of folktales, stories, sermons, and songs she gathered from her childhood memories and her folk investigations. We are introduced to storytelling with sources handed down through generations of black people in these works.

Their Eyes Were Watching God has secured Hurston’s broad legacy. It is the story of Janie, a young black woman whose journey through three marriages culminates in her gaining complete insight into her experiences and herself. The novel is lyrical, with both the narrator and Janie herself telling the reader how she moves from being treated no better than a mule by her first husband to being silenced and put on a pedestal by the second to find her voice and equality with her third. The novel has resonated with so many women readers because it depicts a woman who has primarily conquered gender and societal norms set to contain and restrain her individuality and creativity. Like Hurston herself, Janie is childless. She seeks adult harmony with a man instead of subservience to male domination. Janie’s life, rendered as a story-within-a-story, is another version of heroic journeys fundamental in the literature of cultures throughout the world. In Janie’s case, the way the story is told is as important as the news it brings.

“Sometimes, I feel discriminated against, but it does not make me angry. It merely astonishes me. How can any deny themselves the pleasure of my company? It’s beyond me.” - Zora Neal Hurston

Ernest Hemingway once said of Mark Twain, “He was all our grandfather” – meaning the irreplaceable ancestor for white American male writers. If that is so, then Zora Neale Hurston is “all our grandmother” to so many black artists who followed her. The rediscovery of Their Eyes Were Watching God and Hurston’s other works in the 1970s has had a profound effect on black fiction writers, poets, essayists, folklorists, and more. It has been vital to those whose attention to the spoken word, as dialogue, as narration, as a song, as a poem, as a rap, continues to mine, to uncover, to rescue from degradation, neglect, and indifference, the profundity of African American culture and history.

The diversity of art that can track a path back to Hurston resists any attempt to calculate it. But Hurston would recognize her influence in the fiction of Toni Morrison, Alice Walker, Gayl Jones, Jesmyn Ward, Tayari Jones, the prose and poetry of Audre Lorde, the essays of Morgan Jenkins and Angela Davis, the poetry of Nikki Giovanni, Sonia Sanchez, Nikky Finney, Rita Dove, Harryette Mullen, Jericho Brown, Yusef Komunyakaa, Fred Moten, Tracey Smith, Natasha Trethewey, and Amanda Gorman; in the blues, jazz and roots music of Odetta, Nina Simone, Sweet Honey in the Rock, Abbey Lincoln, Shemekia Copeland, Tracey Chapman, Brittany Howard, India Arie, and Rhiannon Gidden; and the hip-hop artistry of icons like Grandmaster Flash, Blackalicious, and Poor Righteous Teachers legends like Tupac Shakur.

Dr. Gayle Pemberton is Professor Emerita of English and African American Studies at Wesleyan University, the author of The Hottest Water in Chicago, and an advisor to New Profit. She is a former Guggenheim Foundation, W. E. B. Du Bois Institute and Ford Foundation fellow. Read her first Before Us, Among Us post for New Profit, Celebrating Black Artists Who Lifted Up Movements, Shaped Our Culture, and Changed History.

Wrapped in Rainbows: The Life of Zora Neale Hurston by Valerie Boyd

Zora Neale Hurston: I Have Been in Sorrow’s Kitchen by Laura Baskes Litwin

Zora Neale Hurston : A Biography of the Spirit by Deborah G. Plant

The Schomburg Center for Research in Black Culture of the New York Public Library contains significant material on Hurston.